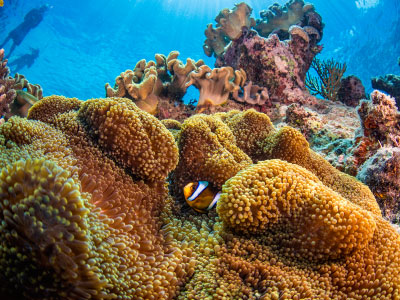 This Australian summer, the continuing threat of a major coral bleaching event looms ever large, threatening to impact large sections of the Great Barrier Reef, particularly in the northern areas most impacted by warmer-than-average weather. As coral reefs around the world face more and more environmental pressures, scientists are continually looking for ways to help coral propagate and survive.  While traditional methods of preserving coral reefs continue to develop, some organisations are literally taking re-structuring of the reef into their own hands.

Off the coast of Western Australia, in an area known as the Abrolhos Islands, a team of fishermen is using artificially-created substrate to try and propagate new coral. After years of commercially fishing cray and wet-line fish off the Australian coastline, John Wheatland resolved to help regenerate reefs that have suffered the impacts of fishing, and the result developed over the last 13 years is heartening. Photographs reveal that the trio’s process for creating the substrate and introducing it to ecosystems is highly successful, receiving interest from governments and large corporations around the world.

A ‘substrate’ is a surface on which an organism attaches itself and grows. In this case, a limestone base is used, which then accumulates coralline algae. The substrate is made using limestone and other ingredients, and the team pumps seawater through until it reaches the same acidity as limestone found in the ocean. Then alkaline algae start growing on it within about two months, depending on the water temperature. The algae attracts coral spores [known as ‘planula larva’] to settle on the rock, where they can feed on the algae.

With reefs around the world under pressure, only time will tell if strategies like this will have beneficial results to coral ecosystems. It is with grassroots research and implementation that projects like these will help slow the impacts facing marine wildlife. Most importantly, work such as this spotlights the need for increased research and conservation, and hopefully efforts like these will translate into a sustainable long-term option to help the recovery of reefs worldwide.