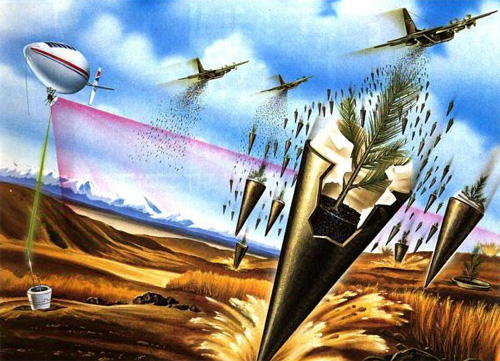 Picture an empty field at sunrise, still fresh with morning dew and a slight haze. Suddenly the low roar of plane engines starts to get louder, and the silhouette of a squad of planes emerges over the horizon in perfect formation. As they near their target, the bomb-bay doors open, and hundreds of football-sized bombs are released in a torrential cascade. Each individual bomb strikes the earth, driven into the soil and at the moment of impact… silence. Six months later, each small impact has now sprouted a small sapling, and the area is taking the shape of a young forest. It’s not a scene out of a bizarre war movie, but rather, a little-known method for reforestation that could change the way trees are planted worldwide.

Seed bombs, also called aerial reforestation, is not a new idea. The earliest records of aerial reforestation date back from 1930. In this period, planes were used to distribute seeds over certain inaccessible mountains in Honolulu after forest fires. The term “seed grenade” was first used by Liz Christy in 1973 when she started the “Green Guerrillas” and were made from balloons filled with tomato seeds and fertilizer. Advances in technology mean that one day, un-piloted drones could be dispatched to remote areas affected by fires, drought, or other natural disasters and assist in replanting native vegetation.

These techniques are being trailed successfully all over the world. The Thai government has initiated a five-year pilot project that uses aerial reforestation to boost forest regeneration. Seed bombing is also widely used in Africa; where they are put in barren or simply grassy areas. With technology expanding, the contents of a seed bomb are now placed in a biodegradable container and “bombed” grenade-style onto the land. As the sprout grows, the container biodegrades into the soil. The process is usually done as a large-scale project with hundreds dropped in a single area at any one time. Provided enough water, adequate sunlight, and low competition from existing flora and fauna, seed-bombed barren land could be host to new plants in as little as a month.