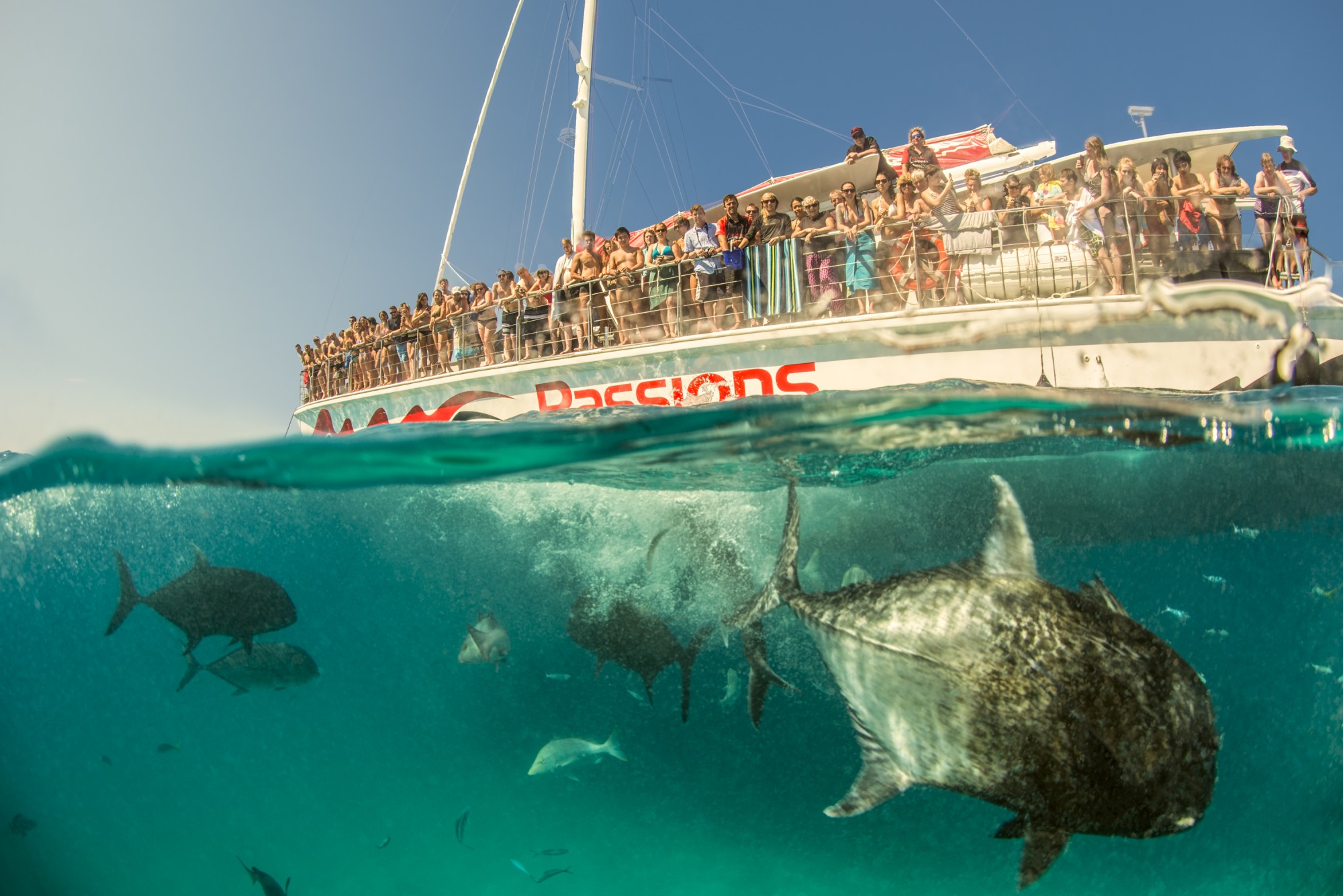 What are those dark shapes circling the boat? With sleek bodies and pointy fins, the back of your mind screams SHARK! And with this, your thoughts begin race. I’m definitely not getting in the water. What if the boat sinks? Am I going to get eaten?! Well, you can put your mind at ease, because those large fish circling the boat aren’t sharks. They are large ocean-going fish called Giant Trevally, and they are some of the largest, fastest predators in the world’s oceans.

The Giant Trevally is a common sight on the Great Barrier reef, and can be found worldwide throughout the tropical waters of the Indo-Pacific region, with a range stretching from South Africa in the west to Hawaii in the east, including Japan in the north and Australia in the south. They are easily recognisable by their steep, sloping head profile and pale grey colour; however as males age, they turn a dark black colour, possibly as a sign of virility to females. Reaching sizes upwards of 1.7 metres and weighing as much as 80 kilograms, these fish are highly prized as game fish, with ceremonial fishing in Hawai’i dating back to prehistoric times.

One of the most distinguishing features of the Giant Trevally, or ‘GT’ as they are commonly called on the reef, is its speed. Giant Trevally will hunt on their own, or in large schools, and have a top speed estimated at over 60 kilometres per hour. The species predominantly takes various fish as prey, although crustaceans, cephalopods and molluscs make up a considerable part of their diets in some regions. The species has some quite novel hunting strategies, including shadowing monk seals to pick off escaping prey, as well as using sharks to ambush other smaller fish.

So when you come out to the reef, keep an eye out for these large fish. While GTs are not usually dangerous to humans, it is a good idea not to feed them or try to touch them, as groups are excitable with food in the water, and a stray finger or hand may be hard to distinguish from a piece of fish or other food item. The best thing to do is point your camera, and try and get an amazing photographic memento, and avoid feeding them, particularly anything that is not a natural part of their diet.

Remember: We’ve got one reef. Let’s take care of it.

The Secret to a Clear Mask While Snorkeling…

The Secret to a Clear Mask While Snorkeling…