Scuba diving is one of those activities that unite a diverse group of people all over the world. Men and women, young and old alike bond together over their love of the underwater environment. One major attraction to the sport is that there are quite a few different ecosystems to enjoy. The rising popularity of scuba diving as a sport and the increase of travel opportunities for enthusiasts have created dive specialties that would have been thought of as fantasy in the early days of scuba. While we specialise in reef diving, we thought we’d take a look at three other types of dives that might pique your interest.

As the name would suggest, night diving is a specialty that involves diving after the sun has said farewell. While not much in the way of skills change when a person goes night diving, there are some important equipment and environmental elements to consider. First of all, without sunlight, you will obviously need an underwater torch, but without the heat of sunlight, you may want to increase your exposure protection. Adding another layer or increasing the thickness of your wetsuit will change your buoyancy, so be sure to adjust your weights accordingly. So what is it like diving at night? Individual perceptions obviously vary, but in general people describe it as silent, mysterious, and other-worldly. You will also see a different aspect to wildlife, particularly if you are diving on a reef. The only way to know for sure? Try it for yourself! 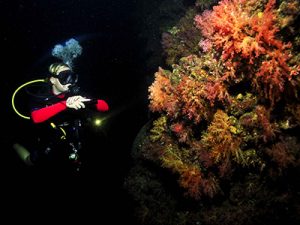 Ice diving is definitely a niche specialty. These divers see and experience things that even seasoned professionals can only dream of. Teamwork is essential in ice diving, the training is extensive. One of the first things you learn is how to coordinate the roles of all the support personnel. Ice diving requires a cool head and steady temperament. Because there is often only one entry and exit point, concentration and focus is essential. Ice diving is really an experience, and is not as well-known for interactions with wildlife. One of the main dangers of ice diving is that  there is no direct access to the surface in an emergency.

Often considered the highest-risk form of scuba diving, cave divers go into vast underwater cave systems. Cave diving has a relatively few amount of die-hard enthusiasts for several reasons. First, it requires a lot of specialty equipment, such as such as re-breathers, diver propulsion vehicles and dry suits. Some of which can be very expensive. Cave diving can be considered a type of technical diving due to the level of skill and equipment required to perform safely. A large part of cave diving involves planning decompression stops, which adds to the risk factor. Other major risks include disorientation, entrapment, and drowning due to running out of air. The greatest danger in cave diving is the lack of a free surface during large parts of the dive. 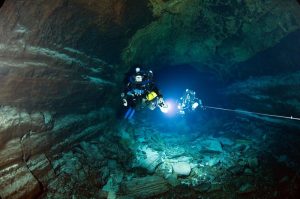