The annual influx of American university students visiting the Great Barrier Reef has begun with the first of around 1500 diving and snorkelling with Passions of Paradise this week.

Cairns is the site of the Australian AustraLearn Culture and Adventure Program, a six-day in-country orientation designed to welcome students studying in Australia and help them adjust to the academic and cultural differences they might encounter.

As well as travelling to the Reef with Passions of Paradise, the students will be introduced to the rainforest, the region’s wildlife and learn about indigenous culture.

Passions of Paradise Chief Executive Officer Scotty Garden said the university students arrived during what otherwise would be a quiet time of the year with the 25m high-speed catamaran filled to capacity most days for the last two weeks of February.

“Passions first started taking the American students to the Great Barrier Reef in 1995 with just a few groups of around 20 and numbers have continued to grow with studying abroad for a semester increasing in popularity in the United States,” he said.

“Numbers dipped a little with the Global Financial Crisis last year and we were concerned the strong Aussie dollar would have a negative impact, but have been pleased to see numbers return to their previous levels.

“The students arrive each year in February when we get our largest groups, then we have scattered groups until July when the next influx arrives before they begin their studies.”

Mr Garden said Passions of Paradise had developed reef briefings to suit the students who enjoy an interactive experience on the Great Barrier Reef and were keen to experience sustainable tourism.

“The students are attracted to our eco certifications and we get a lot of interest in our eco programs such as Save a Shark, especially if they are studying marine biology,” he said.

As well as hosting professors and study leaders in the past, Passions hosts students as interns for a 10-week program where they learn about tourism and, in particular, eco-tourism. 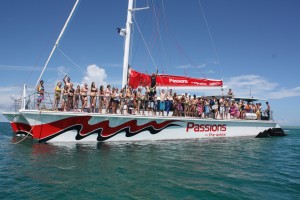